The 2022 International Conference on Bioinformatics and Intelligent Computing(BIC 2022) will be held on January 20-22, 2022 in Sanya, China. The following information about the schedule is for your reference or download the Conference Agenda : 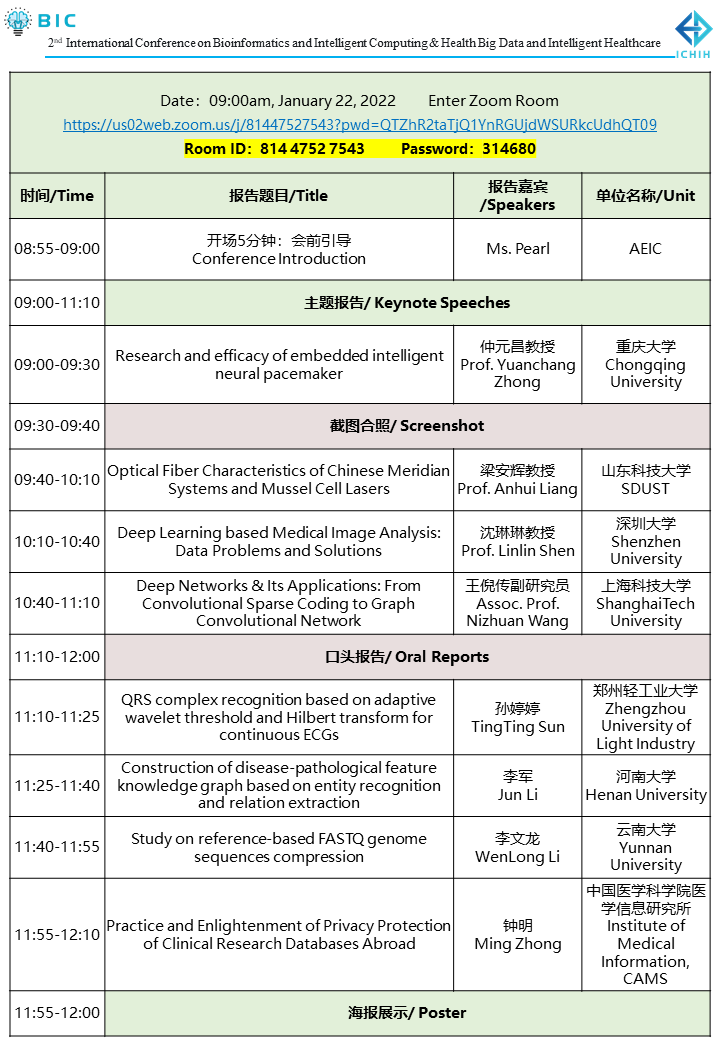 *The outline programme is shown on this page. A more detailed programme will be emailed to you after registration deadline. Actual time arrangement may be a little different according to participant numbers.

In recent years Sanya has become a popular tourist destination. Numerous international hotel chains are now established in the area. In 2009 the luxury Mandarin Oriental hotel group opened in the Dadong Hai area of Sanya, their first property in mainland China. There are now over 100 hotels, ranging from international brands to locally managed resorts.

Russian and English signs can be seen throughout the city. Restaurants in Sanya are also infamous for over-charging tourists (whether foreign or Chinese). However, due to the recent exposure of this practice posted on the micro-blogging site Sina Weibo, Hainan government officials and Sanya city officials have vowed to crack down on this practice. The Sanya Industrial and Commercial Bureau has also begun to implement an open and transparent real-time information system of the city's seafood restaurants during the May Day holiday for public supervision in order to stop any future price gouging by restaurants.

Nature reserves of Yalong Bay Tropical Paradise Forest Park (亚龙湾热带 天堂森林公园) and Sanya Coral Reef National Nature Reserve (三亚珊瑚礁国家级自然保护区) are located nearby Yalong Bay, and Yalong Bay National Tourism Holiday Resort was created. In recent years, as the waters of Sanya Bay and others below mentioned are becoming clearer and healthier, several species of dolphins, including endangered Chinese white dolphins, appear along the coasts from time to time. However, they have not been considered as targeted tourism attractions.

The Tiger and Crocodile centre.

Lingshui/Xiangshui Li'an Ocean Harbor Theme Park is projected for 2013. It will be the largest water park in Asia

The city is served by Sanya Phoenix International Airport. Taxis are available throughout the city.

Buses from other parts of Hainan serve Sanya's bus terminal. The No. 8 bus connects the airport to Dadonghai Beach. From there tourists can take the 24 or 25 bus to Yalong Bay or the 28 bus to Haitang Bay. There is also a free bus from Luhuitou Square to the Duty-Free Shopping Center at Haitang Bay, the largest such center in China.

The Hainan East Ring Intercity Rail links Sanya and Haikou and runs along the east coast of Hainan Island. There are 15 stations in between, either in operation or still under construction. Trains are designed to travel at 250 km/h (160 mph). Travel time from Sanya to Haikou is approximately 1 hour and 22 minutes. The Hainan Western Ring High-Speed Railway, running along the west coast of the province also links Sanya to Haikou.